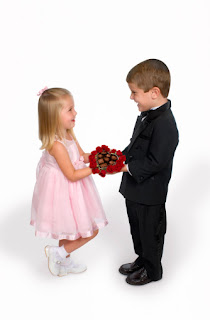 Then I approached her,
“Hey, listen. It’s really a nice
lovely suit you have today.”

---------------
Without realizing it, we all have come to the second month of the year 2007. Time passes very fast. For many people, St. Valentine’s Day will be their most sought-after day in the month. A lot of plan has been made for this day for many people. Many people wish to express their romantic affection to the people they love. As for me, I’m kinda jumpy thinking about what gonna happen to me on February 14th this year. As a matter of fact, V-Day has never been a special day for me. I treated it the same like any other days in the year. But, I have spent a lot of thinking about it these couple of days.

Perhaps, one of the obvious reasons will be that I’m in the love mood. I finally had a crush on somebody after missing the feeling for the last 4 years. Ever since February 2003, my feeling has been dumbed. My once glittering relationship has turned into a complete utter mess. The beautiful goddess has turned out to be abusing me and our relationship in order to get what she wanted from another man. Then, I became a very pathetic person who did not dare to believe that any woman would love me. I became a love monster and love terrorist for the past 4 years due to the traumatic experience I had with that particular girl that broke my heart in February 2003. I’ve tried so hard to get over it and get healed. The poem above is one of the pieces that I had produced in memory of the brokenhearted incident.

I met her again in December last year after trying to avoid meeting her for the past 4 years. I met her again because I want to let her go. I must start a new life. Finally, I can buried all my feelings for her. Right in the heaps of the-now-over expectation, there came a new resurrection. I got my love mood back and started to fall in love with somebody else. This time, I have promised myself that I would never want to be fooled again with my emotion. I have to gain control over my emotion, so that my life can go into the right direction. The past failures will make me stronger and be able to face all life challenges.

Couple of days ago, I read the following verses from the book of Proverbs that I would like to share with you. Enjoy them:

“As I stood at the window of my house looking out through the shutters, watching the mindless crowd stroll by, I spotted a young man without any sense arriving at the corner of the street where she lived, then turning up the path to her house. It was dusk, the evening coming on, the darkness thickening into night. Just then, a woman met him—she’d been lying in wait for him, dressed to seduce him. Brazen and brash she was, restless and roaming, never at home, Walking the streets, loitering in the mall, hanging out at every corner in town. She threw her arms around him and kissed him, boldly took his arm and said, "I’ve got all the makings for a feast—today I made my offerings, my vows are all paid, so now I’ve come to find you, hoping to catch sight of your face—and here you are! I’ve spread fresh, clean sheets on my bed, colorful imported linens. My bed is aromatic with spices and exotic fragrances. Come, let’s make love all night, spend the night in ecstatic lovemaking! My husband’s not home; he’s away on business, and he won’t be back for a month." Soon she has him eating out of her hand, bewitched by her honeyed speech. Before you know it, he’s trotting behind her, like a calf led to the butcher shop, Like a stag lured into ambush and then shot with an arrow, Like a bird flying into a net not knowing that its flying life is over. So, friends, listen to me, take these words of mine most seriously. Don’t fool around with a woman like that; don’t even stroll through her neighborhood. Countless victims come under her spell; she’s the death of many a poor man. She runs a halfway house to hell, fits you out with a shroud and a coffin.”
Proverbs 7: 6-27 (The Message by Eugene Peterson)

The conclusion:
“A beautiful woman who lacks discretion is like a gold ring in a pig’s snout.” Proverbs 11:22 (The New Living Translation)
Poetry Relationship

dung2x said…
I love the poem! Bukan ceritanya seh, I mean I like the way it is written. Singkat, padat, yet clearly describe the emotion of the writer.
3:39 PM

Ancilla said…
the show must keep on going, my friend...