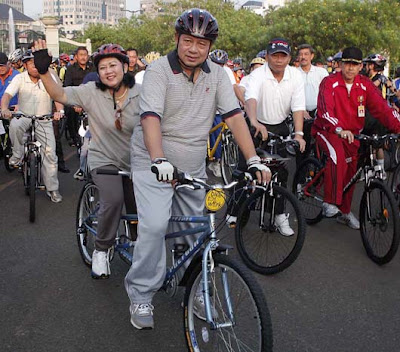 What's the price of oil right now? I don't know. Maybe it has reached the level of $150/barrel. One thing for sure, it keeps on mounting up. Who's to blame? OPEC? Speculators? America as the number one consumer? Middle East as the main producer? Terrorists? God? Is there a conspiracy behind it? I don't wanna care at all. One thing for sure is this: Oil is non-renewable so it will be gone someday, soon or later.

Oil has been such a blessing to all of us but it also created problems as well to our environment. Because of the fuel oil, there are vehicles on our streets: buses, cars, motorcycles, etc. These vehicles mean one thing for all of us: Air Pollution. Air pollution in the end will lead to Global Warming.

So, what is the solution to our climate problem, to rising fuel price, to air pollution? It's very simple, stop using fuel-generated vehicles and start using the traditional means of transportation. One of the examples is by using bicycles.

Take China as an example. The government has so far been able to make cycling as the number one transportation in the country which is not can be considered as a good move. By using bicycles the people need not to be afraid of the rising fuel price and at the same time they also contribute to creating healthy society with healthy body and environment.


Bicycles are an excellent method for getting around China's cities or looping tourist sights. Actually, China impresses many as the kingdom of bicycles. China had 500 million bicycles by 1987. One bicycle for every two people of its population. Bicycles in China are ingrained in every day life and are an important means of transportation and are visible everywhere, which is quite different from that bike-riding is just one way of physical exercise or a sport.

In Indonesia there have been some programs to advocate the use of bicycles, one of them is called "Bike To Work". Sadly this program is not running smoothly because the government have refused to make special 'bike lane'. Governor of Jakarta, Fauzi Bowo, said that he will only make bike lane, if there are more than a million bikers in the city. What a foolish statement from an ignorant governor. He should build first the bike lane so that people will be interested to use bike as transportation. With the crowded street like in Jakarta, who in the world wants to commute using bikes if there is no special lane for it.

Therefore, I really expect that the government of Indonesia should promote the use of bicycles since it will secure our climate and reduce our consumption of the fossil fuel. As a start, the government should start making the bike lane, just like what can be found in most European countries. By making the bike lane, people will be more interested to use bicycles as their means of transportation. 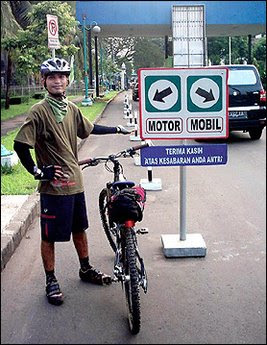 PS: Actually President Yudhoyono has already asked the governors to make special bike lane for bikers, but unfortunately some governors are simply stubborn. One of the example is Fauzi Bowo, the governor of Jakarta.

New Jakarta Governor Fauzi Bowo said his administration would provide special lanes for bicycles once there were at least one million regular cyclists in the city.


"There are some 3,000 cyclists in the city right now. We have to wait until there are one million cyclists because providing special lanes will take part of the road," he said as quoted by Antara news agency.

"One million cyclists will provide enough reason for us to provide such lanes. The need of the majority has to be our priority; we need to be fair to everybody."

Fauzi said his administration used the same reasoning when ignoring residents protesting the construction of busway lanes in parts of the city.
Source: The Jakarta Post

Some interesting opinion about this from other blog:


Add on to the above scenario our troop of ‘bike to work’ cyclists who, without a proper bike lane in this city, get pulverized in the mayhem. Despite having the nerves of a suicide bomber or kamikaze pilot, mowed down by speeding buses going down the wrong way, hit by cars trying to cross over into the ‘busway’ or clipped by motorbikes trying to run pedestrians off the pavement, these bikers are soggy lettuces in a tin can sandwich. Far from being a healthy sport bike to work is a highly dangerous one in this city. If other cars don’t kill you, sooner or later emphysema caused by Jakarta’s awful pollution will. However, either way, it might be comforting to know that you are doing good to the environment. 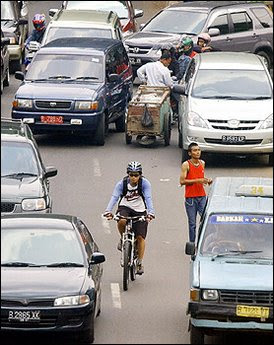 
Every workday morning, a small but expanding community in the traffic-clogged megacity of Jakarta brave fume-belching buses, aggressively driven cars and steamy heat to indulge in an unlikely passion: bike riding.

Indonesia's teeming capital is home to more than 10 million people but with no mass transit system, most get to work or school on packed buses or by motorcycle, with a few enjoying the air-conditioned luxury of their own cars.

Rejecting these options is a 500-strong contingent of cyclists who say they save time by using their bikes, and now with soaring petrol prices -- the government hiked rates by 126 percent in October -- money as well.

Ika Devita Susanti said…
"He should build first the bike lane so that people will be interested to use bike as transportation. With the crowded street like in Jakarta, who in the world wants to commute using bikes if there is no special lane for it."

...well, I agree with you, but Fauzi Bowo argument that he will only make bike lane if there are more than a million bikers in the city, is also makes sense. We dont want this project became useless since the cost exceed the (social) benefit.

Just reviewing the bike lane in my almamater (UI) which none of the student neither the lecturer used it. Some project should not only but ecologically friendly but also economically sound....
4:08 PM