The Journey To The Rest 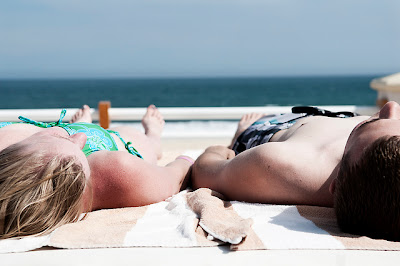 In the spirit of Easter and long weekend, I am writing about the deepest human desire: "to rest".

If I ask you whether you think you need vacation or not, I believe that all of you will say: "I definitely need a vacation". The idea of having a vacation is so intriguing that travel and tourism has grown into a lucrative multimillion dollar industry. Why do we love having a vacation? It's because we can relax ourselves and rest, doing nothing yet enjoying everything. If it is possible, we all want to have vacation all year long. If only we have the money, we will travel the world and doing only things we enjoy doing: to relax and rest. That's the ultimate dream of humankind: to stop worrying about everything and doing practically nothing. Wait a minute! Even lying on the beach wearing a sunshade is also doing something. What does doing practically nothing mean? It simply means you don't waste any effort to reach what you want. In other word, we call it "effortless"

Now, I am going to talk about "effort". It is basically the reason why we can't have vacation as much as we want to. In order to survive in this planet, you must have an effort. Without effort, you become a sore loser. The more effort you have, the more successful you become. That everything is only achievable through effort is the very basic thing we need to learn if we want to survive another day. Even on our first day on earth, as a baby, we need to put an effort by crying to get what we want. As we get older, we need to put extra effort to learn stuffs, to practice, and to excel in order we can be what we are today. In order to have your vacation, you need an effort to save your money so when the time comes, you can have your dream vacation.

In order to save our sweat in doing effort, we create what we call "technology". Technology is invented so that we can reduce our effort in achieving something. If I want to go China tomorrow, I don't need to walk and swim miles. I can just take a technology called a plane ride and after several hours, I'll land in China. Does it mean that I don't need to spend an effort to go to China? No, it doesn't. I still need to book a flight, get a visa, and walk myself to my seat on the airplane. It will be effortless if I can teleport myself to go to China by just blinking my eyes. It doesn't happen like that because teleporting myself cannot be done by technology, it needs a miracle.

A long time ago, in the beginning of human history, it is told in the Bible that Adam and Eve lived effortlessly in the garden of Eden, The Land of The Effortless. They could go to anywhere they want to by just blinking their eyes. They didn't have to work in order to get their food and clothes. They didn't have to worry about anything since no tiger wanted to eat them and no virus could kill them. There were no records of death or injury. They didn't need any insurance since they never had a bad day. It was all happening since they lived in paradise: a real vacation getaway. The word "effort" was not found in their dictionary and they spent their day practically doing nothing.

In paradise, we learn the word "provision" which means that everything is provided. Adam and Eve didn't have to work since everything is facilitated for them. It could happen because they were the honorable guests of The Almighty King who owns Eden. We learn the word "provision" from our parents. As a child, we don't have to worry about everything since our parents provide for us. If we need something, all we need is just ask and we will receive. Adam and Eve lived in provision until they were kicked out by the King after they broke the rule of the kingdom. They were sent away to live in another land where they now became the guests of Mother Earth & Co. which includes wild animals, stormy weather, and natural disaster. They now have to learn to survive since there is no more provision, only opportunity.

Our ancestors, Adam and Eve, had to move from Blessed Land to Cursed World. In this new place, if they wanted to get anything, they must put an effort in order to get the opportunity. They need to work if they want to eat. The harder they work, the more food they have. They grew old and weary but all their life, they constantly dreamed of having a vacation where they can have a break and rest. They died and their kids considered their parents to "rest in peace" since they don't have to worry anymore about troubles of the world. A prophet once said that funerals are better than the births of babies, since babies have to spend time in this Cursed World, while the death can rest deep down in the ground.

The Almighty King knows that humankind wants to return to Eden. Humankind tried to reach back to Eden by their effort but it is useless since The Land of The Effortless cannot be accessed by human effort. He then tried to teach the descendants of Adam and Eve the concept of "rest". A psalmist once said that the King provides for his beloved when they rest and not when they put an effort. Through his prophets, the King started to introduce the concept of Sabbath, a day of rest. Humankind works 6 days a week but on the 7th day, they have to abstain from doing anything and to simply rest. He then moved on to establish The Year of The Sabbath (the 7th year) when humankind has to abstain from doing any work for one whole year. The humankind has to have faith that even though they don't work on the 7th day and 7th year, they don't have to worry since everything is being provided. Humankind has to simply rest and trust in God's provision.

The Lord of The Sabbath did what no one thought it was supposed to do. He cannot break his rule but he can abolish the punishment by letting himself suffer the punishment. He had to face death but he then conquered death on Easter morning. His action has paved a new way for humankind to return to Eden if they want to follow the path. All he requires is for humankind to stop trying and to trust in The Lord of The Sabbath since Eden, The Land of The Effortless cannot be accessed by human effort, but by faith. When humankind reach Eden someday, they will rest, enjoy their life and live happily ever after in the place they call "paradise".

Paulo Gonçalves said…
Hello,
I visited your blog.
Congratulations for your work!! An interesting and nice blog!!
Good luck with your blog!
Greetings from Algarve, Portugal
Paulo Gonçalves

I invite you to visit my blog
http://viajaredescobrir.blogspot.com